Garcia-Tolson’s mission is to lead by example. His motto of “No Legs, No Limits” concisely conveys the physical challenge that he has overcome as a double above-the-knee amputee, and his passionate desire to inspire others through his numerous achievements.

“The real disability in life is a negative attitude,” says Garcia-Tolson. “With passion and a positive outlook—plus a lot of hard work—the seemingly impossible becomes possible.”

Thus far, his medal tally includes two gold, two silver, and one bronze (2004–2016). In 2012, Garcia-Tolson also competed in the 100-meter and 200-meter track and field events. Additionally, he holds numerous triathlon finishes to his credit and was one of six triathletes highlighted in the feature-length film We Are Triathletes, showcasing his efforts at the CHALLENGEFAMILY flagship event, CHALLENGEROTH.

“When I raced THECHAMPIONSHIP, I was blown away by the passion of the entire CHALLENGEFAMILY—the staff, the spectators, the volunteers, and the fellow athletes from around the world,” he continues. “It was an experience I’ll never forget, and I can’t wait to be a part of this new race in the U.S. It’s history in the making at Daytona International Speedway. I’m honored to join Charlie and Steve, not only to tackle the Middle Distance tri, but to raise funds for The NASCAR Foundation to help children in need.”

Joining Garcia-Tolson in the relay are Lydecker and Phelps.

A former collegiate swimmer at American University, Lydecker serves as CEO of Foundation Risk Partners, a company he founded two years ago and has developed into a major national insurance firm. Now 55, Lydecker is a four-time World Champion swimmer and still holds the Alcatraz Swim Classic men’s open category record from his victory in 2007.

As newly-appointed NASCAR president, Phelps’ professional focus is on fast cars. But the 54-year-old is also an avid and experienced road cyclist, routinely training with the likes of former Tour de France competitor George Hincapie. Phelps never shies away from a turn at the front of the paceline. He’s known for pushing the pace with his training partners, leading the pack at 26-plus miles per hour.

Clad in CHALLENGEDAYTONA-branded kits provided by Veneto Sportswear, the talented trio will race on behalf of The NASCAR Foundation. This leading charitable organization works to improve the lives of children who need it most in NASCAR communities through the Speediatrics Children’s Fund and the Betty Jane France Humanitarian Award. The NASCAR Foundation makes children’s health and medical needs their top priority, driven by the belief that every child should have a chance at a healthy life and deserves to get across the finish line.

Anyone interested in supporting their effort with a charitable donation is invited to visit www.nascarfoundation.org/relay.

The CHALLENGEDAYTONA triathlon race and endurance sports festival is scheduled for December 7-9, 2018 at Daytona International Speedway. The top six male and female finishers in each Middle Distance Triathlon age group will qualify for THECHAMPIONSHIP, to be held on June 2nd 2019 at the x-bionic sphere in Samorin, Slovakia. For more information visit www.challenge-daytona.com.

About CHALLENGEDAYTONA
Are you ready to swim, bike, and run at the “World Center of Racing”? From December 7th-9th, 2018, Daytona International Speedway will welcome triathletes and triathlon fans from around the world to CHALLENGEDAYTONA. The entire festival of events will take place at the approximately 500-acre motorsports complex, home of “The Great American Race”—the DAYTONA 500. www.challenge-daytona.com

About The NASCAR Foundation

The National Association for Stock Car Auto Racing Inc. (NASCAR) established The NASCAR Foundation in January 2006 to support initiatives that positively affect the lives of children throughout the United States. The 501(c) (3) non-profit entity partners with medical experts and other charitable organizations to fund children’s health care programs. The NASCAR Foundation has cumulatively donated more than $32 million to reach more than one million children. For more information on The NASCAR Foundation, visit NASCARfoundation.org. Follow The NASCAR Foundation on Facebook at www.Facebook.com/NASCARFoundation or on Twitter: @NASCAR_FDN. 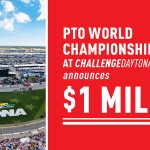