Challenge Daytona: ‘Grateful for such an epic event and responsible measures’

It was generally known that CHALLENGEDAYTONA was going to be the final race of the season, but not many people would have thought that it was also going to be one of the first races of the year. After a successful start of the weekend with the Pro-Am Relay yesterday, today is the main day for the Age Group athletes. There can be no doubt that all athletes are craving to race again, as the entire event is sold out. At the finish line there was nothing but smiles from the athletes: “It was amazing to be out on this course, maybe even more because of these bizarre times. I’m so grateful that the organization was able to organise such an epic event while acting responsible according to the corona measures.”

“What we all love about this event, is that it’s truly one for the entire family”, says CHALLENGEFAMILY CEO Jort Vlam. “There are races for every member of the family with both the triathlon, duathlon and aquathlon events, as the runs and the Junior races. It’s absolutely amazing to see entire families coming to Daytona and enjoy our beloved sport together.”

The unique venue of the race, Daytona International Speedway®, is extremely important in many ways this year. Next to the fact that it’s an absolutely bucket list location to race, the venue is extremely important for the implementation of the COVID-19 safety policies. The event is utilizing NASCAR® protocols, who were hosting at least 20.000 fans at their last event. Because there are only a few places to access the speedway, all people can be checked before they enter. “I’m really impressed to see all the safety measurements that are implemented”, Vlam says. “The local team in Daytona did an amazing job making sure the event could take place in a more than safe way.”

The Middle Distance Triathlon, the qualification event for CHALLENGEFAMILY’s THECHAMPIONSHIP – taking place at the x-bionic sphere in Samorin next year, was won by Brian Reynolds and Mollie Hebda. Reynolds secured the win in the men’s race on the run, by running a 1:17 half marathon. In the women’s race, Hebda proved to be a class on its own by leading the race from halfway the bike till the finish.

Tomorrow, Sunday December 6th, is the final day of the event. The day starts with the Sprint Distance Triathlon and Duathlon and will be followed by the PTO 2020 Championship. With the presence of the best athletes in the world on both the short and long distance and a prize purse of $1,115,000, the event is seen as the biggest triathlon race of the year. The women’s race starts at 10:00 am EST and will be followed by the men’s race, starting at 14:00 pm EST. The entire race will be broadcasted live world-wide. All information about this live broadcast can be found on https://protriathletes.org/watch-pto-2020-championship-live/ . 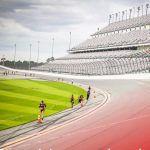